On Friday 8th July, ResPublica’s inaugural North conference Finding True North hosted over 250 leaders from across the North at the beautiful Lowry Theatre, Salford. Covered by Manchester Evening News, The Guardian, The Times, FT and on BBC Daily Politics, the conference saw the launch of A Manifesto for the North mapping out the next steps for the Northern Powerhouse agenda and placing identity, culture, collaboration, and innovation at its heart.

Finding True North was an enormous success and will be returning in 2017 after welcoming over 50 representatives of Local Authorities from across the North, more than 100 leaders from industry and academia, dozens of voices from communities and civil society, and a wealth of national and local journalists.

The Government’s Northern Powerhouse concept has unlocked the door to prosperity outside of the South-East, and given the keys to regional leaders. A key test of this political move’s success will be how it translates into real change for the people who live there. Progress can not be judged solely on higher living standards or the number of jobs created. We must ensure that greater freedoms for citizens aren’t just economic, but instead that this once in a generation opportunity enables communities to rebuild and society to improve.

Successful cities and regions are also powerhouses for new ideas, technological innovation and cultural creativity. Finding True North will foster debate as to how we re-awaken and nurture these capacities in our northern cities. We’ll be exploring whether there is an underpinning sense of identity and connection around which the North can build not only economic prosperity, but forge a cultural and intellectual renaissance.

The North is filled with tremendous potential, backed by a rich history of cultural diversity and intellectual curiosity. When taken together, the region is home to a number of clear and powerful identities. Newly devolved powers should enable leaders to make use of these distinct identities, defining a local region’s priorities and needs, and fostering the pride that will rejuvenate rather than deter. The North has a proud history of creativity, entrepreneurship, independence and industry. Enabling collaboration between its businesses, sectors, communities and public services, and fostering constructive and positive dialogue between newly invigorated and empowered local leaders and those who they are elected to serve.

Northern cities have for the most part moved to embrace the opportunities extended to them to in the Cities and Local Government Devolution Bill. There is widespread agreement that ‘city deals’ will enable regeneration and improvement, attracting inward investment necessary for creating a successful future for all its 22 million inhabitants. Without greater effort to collaborate and foster unity, the region would be unable to escape historic under-performance of its economy and the Government’s ambition for a Northern Powerhouse will be left unfulfilled.

ResPublica’s trail-blazing report Devo Max – Devo Manc spearheaded the debate about city devolution, arguing that Northern cities and regions developing broader autonomy would be a pre-condition for renewal. Finding True North will platform this discussion as the North embarks on an exciting age of opportunity.

A Manifesto for the North

Launched on the 8th July at our flagship Finding True North conference in Salford, A Manifesto for the North is our vision for the region harnessing further devolved powers; culturally vibrant and with the benefits of economic growth accrued to all.

Commenting on the manifesto, Rt Hon Greg Clark MP, Secretary of State for Communities and Local Government, said: “This is an important and thought-provoking Manifesto that deserves to be carefully considered. The Government will work closely with partners across the North to devolve more power to people and places in order to realise our ambitious plans to build a Northern Powerhouse.”

Minister for the Northern Powerhouse James Wharton MP added: “I welcome the active debate around the future direction and evolution of the Northern Powerhouse. Congratulations to ResPublica for this contribution, it is an important project and has the potential to deliver real long term benefits to our economy.”

There have been too many platitudes written about the North, and too many partial and piecemeal policies that have done little to reverse the decades of decline. For years, a combination of indifference and fatalism has left local leaders with a monopoly on power content to administer decline, and thus they must share some of the blame.

Of all the post-war innovations and attempts at reversing abject decline, the Northern Powerhouse has come closest to what is needed. With its mixture of place-based devolution and connectivity, it has at last created an international brand and vision that has shifted the perception of what might be possible. In this way it has finally created the vehicle that might serve as a conduit for massive private sector investment.

These are welcome developments, but we must go further and faster. For instance, on transport we must get going on a direct high-speed east to west line. More generally, the city-region devolution deals should be seen as an opening not a final offer from central government – with the decentralisation of investment decisions greatly expanded in scope and scale.

Post-Brexit, we must not lose the north once more. We must maintain the urgent reinvention of our country. We must demand from those who would be our leaders that they mirror their paeans to social justice with a New Deal for the North, a new deal equal in scale and ambition to what FDR offered a struggling America in the 1930’s.

Nothing less will do, nothing less will deliver. During the 19th century life in the North was fundamentally changed as prosperity and widespread economic growth was attained. It has achieved this transformation once before and it can do so again. ResPublica offers the ideas herein as its contribution to the promise, and resurrection, of the North.

.@res_publica #truenorth needs one voice @Phillip_Blond given us the vision, #northern leaders now need to run with it #NorthernPowerhouse

James Wharton closes @res_publica event by outlining what the Gvt has done & will do for the #NorthernPowerhouse pic.twitter.com/aY0PXbna90 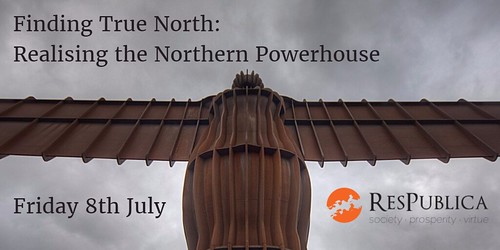